Home > About Our Church

Put simply, Calvary Chapel Portsmouth is a non-denominational Christian church (i.e we are not part of any particular denomination). We are not opposed to denominations as such, only their over-emphasis on doctrinal differences that can lead to division.

We meet each Sunday for our family service, which includes a time of worship led by the Calvary Portsmouth band, a time of Bible study led by Pastor Barry, and a Sunday School for children aged 3-12. After each service we have a time of fellowship and refreshments. We also have a mid-week prayer meeting, Bible study, Ladies meeting and Mens meeting.

On a number of occasions throughout the year we host or attend various teaching conferences. Our primary aim is to faithfully serve our great God and Saviour, and to help any “who have ears to hear” to understand this most amazing book we call the Bible as we grow together in knowledge and grace.

Our faith is based in the simple fact of the resurrection of Jesus Christ – almost 2000 years ago. That may sound strange to ears of people in the 21st Century, but as a prominent Christian speaker was once asked, “Why can’t you intellectually refute Christianity?” The answer was given: “For a very simple reason. I am not able to explain away an event in history – the resurrection of Jesus Christ”

Lord Lyndhurst (1772-1863), recognised as one of the greatest legal minds in British history said:

I know pretty well what evidence is; and I tell you, such evidence as that for the Resurrection has never broken down yet.

History records that two young men, Gilbert West and Lord Lyttleton, went up to Oxford. They were friends of Dr. Johnson and Alexander Pope, in the swim of society. They were determined to attack the very basis of the Christian faith. So Lyttleton settled down to prove that Saul of Tarsus was never converted to the Christianity, and West to demonstrate that Jesus never rose from the tomb. Some time later, they met to discuss their findings. Both were a little sheepish. For they had both come to similar and disturbing conclusions. Lyttleton found, on examination, that Saul of Tarsus did become a radically new man through his conversation to Christianity, and West found that the evidence pointed unmistakably to the fact that Jesus did rise from the dead.
– Observations on the History and Evidence of the Resurrection of Jesus Christ – Published 1747

We extend a warm welcome to any who would like to join us, and would love the opportunity to share with you what the risen Jesus has done, and continues to do, in our lives, and the assurance He gives that our sins can be forgiven, and our eternity secured.

Calvary Chapel Portsmouth is a registered charity (1050895 – CALVARY CHAPEL), and we have a comprehensive child & vulnerable adult protection policy. 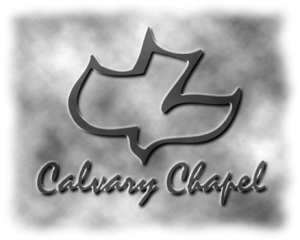 What is it that makes Calvary Chapel different from other Bible-believing, evangelical churches? It’s always good to have a grasp of the unique work that God has done in our fellowship. If Calvary Chapel is exactly like the church across the street it would be better to simply merge the two. But, if there are distinctives that make us different, then we have a unique and special place in the plan of God. Certainly there are churches that share many of our beliefs and practices. We’re not renegades. But God has done a wonderful work of balance in the Calvary Chapel movement that does make us different in many areas. For a copy of the ‘Calvary Chapel Distinctives’, please email us.

Calvary Chapel grew out of the ‘Jesus Movement’ of the late 60’s and early 70’s on the West coast of America. Pastor Chuck Smith was led by the Lord to start teaching expositionaly through the Bible (i.e. verse-by-verse, chapter-by-chapter), something certainly not unique to Calvary Chapel, but something that has become very much a distinctive of it.

There are now thousands of Calvary Chapel fellowships around the world, who although autonomous, hold to the same basic doctrines.

Where Does Calvary Chapel Fit In?

In a broad general sense, Calvary Chapel represents the middle ground between ‘fundamentalism’ and ‘Pentecostalism’ in modern Protestant theology. In fact, we believe that this is at least part of the reason why God has raised up this ministry.

Fundamentalism is that portion of Protestantism that holds to the literal interpretation of the Scriptures, believing that they are divinely inspired and inerrant. Hence, the “fundamentals” of the faith are emphasized. Although the modern news media and the liberal church scorn fundamentalists as backwards and stupid, the truth is that fundamentalism has preserved the integrity of God’s Word and held on to the essential doctrines of the orthodox faith. However, over the years, Christian fundamentalism, whilst clinging to the integrity of God’s Word, tended to become rigid, legalistic, and unaccepting of spiritual gifts. At the other end of the protestant scale we have ‘Pentecostalism’.

Pentecostalism as a modern movement grew out of the Azusa Street revival in Los Angeles at the turn of the 20th century, and produced denominations that emphasize the fullness of the Holy Spirit and the exercise of spiritual and Scriptural gifts of the Spirit that had fallen dormant in the main line churches. Also criticized by traditional churches and news media as being emotionally driven, Pentecostalism restored to the church the importance of gifts of the Spirit and the power of God for the believer today. Thus Pentecostalism became enthusiastic and emotional, often at the expense of the teaching of God’s Word.

Calvary Chapel sits in the balance between the two. At Calvary Chapel Portsmouth we believe in the gifts of the Holy Spirit revealed in the Bible, and we encourage their exercise, but always decently and in order, and with the primary emphasis on the Word of God, which we look to as our primary rule of faith.

So we do believe in the gifts of the Holy Spirit mentioned in the Scriptures, and that they are valid for today if they are exercised within the Scriptural guidelines. We as believers are told in the Bible to covet the best gifts, seeking to exercise them in love that the whole Body of Christ might be edified. However, as the Apostle Paul make clear, love is more important than the most spectacular gifts, and without this love all exercise of spiritual gifts is worthless.

Because of this balance, Calvary Chapel Portsmouth’s services are designed to be centred around the verse by verse teaching of God’s Word, We appreciate that many Pentecostals may think we are not emotional enough, and many fundamentalists may think we are too emotional. That balance, could well be an indication that we are right where God wants us to be.

The congregational form of church government is an invention that appeals to our sense of democracy. Basically, the congregation as a whole makes all decisions in these churches by voting on matters of importance and appointing committees from its ranks to run the daily operation of the church. Most Congregational, Baptist, Pentecostal, Brethren, and non-denominational churches are organized in this fashion. The congregation votes on hiring a pastor, votes on how to spend the money, and on anything else of importance. Although democratic people like the idea, congregational forms of church government often wind up at best causing the pastor to be directed by the sheep he is supposed to lead, and at worst reducing the pastor to a hireling.

The Episcopal form of church government, used by Episcopalian, Anglican, Catholic, Orthodox, and Methodist churches (to name a few) is controlled by a church hierarchy which may have differing names. Basically, there is a bishop, or someone of similar stature if called by a different name, who oversees the churches, appoints pastors to pulpits, sets policy, and guides the vision of the local congregations. Unfortunately, this style of government, which grew out of European monarchies, leaves little freedom for the local pastor or congregation to follow the leading of the Spirit.

The Presbyterian form of church government, which is typical in Presbyterian and Reformed churches, puts the decisions of church policy in the hands of a select group of elders (the “presbytery”) who are appointed in various different ways, depending on the church. These elders are over the pastor, who in turn is over the congregation. The problem here too is that this system puts the God-appointed leader, the pastor, under some of those he is supposed to lead.

Calvary Chapel Portsmouth is organized differently. For us, church government is very simple, not a complex bureaucracy. Committees and sub-committees are essentially non-existent. From that which is seen in Scripture, we believe the pastor is responsible for the church, responsible to hear from God, and responsible to feed and love His people faithfully. In the words of one Calvary Pastor, “My primary task as a pastor, given to me by God, is to bring the saints to maturity in Christ, to equip the saints for the work of ministry”.

At Calvary Chapel Portsmouth, church organization is de-emphasized, and only the organization that is needed to run the church is instituted. The pastor guides the church as he is led by the Holy Spirit, and we trust God to put the pastor where He wants him to be.