In our verse by verse study through Paul’s Epistle to the Galatians we find that Paul makes some almost throw-away-comments, yet they prove to be keys that unlock some Old Testament mysteries! It seems that the Holy Spirit has left us clues in the New Testament that reveal or help to explain things in the Old Testament. Once again, this is evidence of supernatural design from outside our time domain!

In Galatians chapter 3 Paul is contrasting the Gospel of Grace with the Law, and highlighting that God made Abraham a promise that was unconditional, all he had to do was believe it! He couldn’t earn it; it was a gift of God’s Grace. The promise was of blessing and an inheritance that was quite literally ‘out of this world’!

Hebrews 11:9-10 tells us that “By faith he sojourned in the land of promise, as in a strange country, dwelling in tabernacles with Isaac and Jacob, the heirs with him of the same promise: For he looked for a city which hath foundations, whose builder and maker is God”.

In verse 17 of Galatians ch.3 Paul makes the point that the Law of Moses which came after the promise to Abraham cannot annul  the promise that Abraham had received by faith. But in telling us this Paul says something that would be easy for us to miss: “And this I say, that the covenant, that was confirmed before of God in Christ, the law, which was four hundred and thirty years after, cannot disannul, that it should make the promise of none effect”.

What is significant about this? Well, it helps to correct an error that seems to be made by many, including Bible commentators, and silences the critics of the Bible who immediately claim there is a contradiction in the text of the Old Testament. 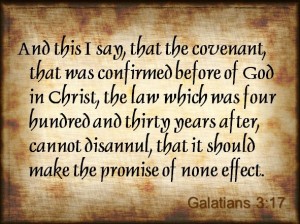 The problem emanates from a misunderstanding of Exodus 12:40 and Genesis 15:13 (which is also quoted by Stephen in Acts 7:5). Exodus 12:40 seems on the surface to say that Israel spent 430 years in Egypt, but Genesis 15:13 & Acts 7:5 imply that this period is just 400 years! This has led to a number of ways to try to solve and unlock this conundrum, but without using the ‘key’ that Paul gives us in Galatians 3:17!

Let’s begin by looking at Acts 7:5, and God’s  promise to Abraham regarding the land: “And [God} gave [Abraham] no inheritance in [the Land], no, not so much as to set his foot on: yet he promised that he would give it to him for a possession, and to his seed after him, when as yet he had no child”.

In Hebrews we are told that “By faith Abraham, when he was called to go out into a place which he should after receive for an inheritance, obeyed; and he went out, not knowing whither he went. By faith he sojourned in the land of promise, as in a strange country, dwelling in tabernacles with Isaac and Jacob, the heirs with him of the same promise: For he looked for a city which hath foundations, whose builder and maker is God.” (Heb 11:8-10)

It is clear from scripture that Abraham, Issac and Jacob all dwelt in a ‘strange land’, i.e. a land that was not their own (see Genesis 26:2-3 & 28:13). Now, when we go back to Genesis 15:13 we can read it with the knowledge that Canaan, as well as Egypt, was a ‘strange land’ to Abraham and his seed.

“And he said unto Abram, Know of a surety that thy seed shall be a stranger in a land that is not theirs, and shall serve them; and they shall afflict them four hundred years”. There is no question that Isaac and Jacob, as well as Joseph and the Children of Israel in Egypt were all afflicted, indicating that the 400 years were not spent entirely in Egypt as most assume. To remove any doubt, lets look at Joseph and the lineage of Moses:

Another ‘proof’ that the 400 years of affliction in a ‘strange land’ could not have been entirely in Egypt can be seen in looking at the genealogy of Moses.
In Exodus 6:16-20 and 1st Chronicles 6 we have recorded the family tree of Moses, starting with Jacob’s third son Levi: 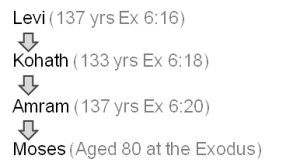 From this we can see that Moses was the great grandson of Levi. This confirms what we find in Genesis 15:13-14,16: “And he said unto Abram, Know of a surety that thy seed shall be a stranger in a land that is not theirs.[Canaan and then Egypt] And also that nation [Egypt], whom they shall serve, will I judge: and afterward shall they come out with great substance…..  But in the fourth generation they shall come hither again: for the iniquity of the Amorites is not yet full” (Gen 15:13,16).

From the context, the four generations are to be counted from the time they begin dwelling in the nation whom they will serve, i.e. the time the family moves to Egypt.

The problem this information presents is as follows:

Either way, there is no way we can twist scripture to make the 400/430 years all occur in Egypt.

In regard to the 430 year sojourn (Ex 12:40), this could not have begun the year Israel moved down into Egypt – nor does scripture state that it did! All we are told in Exodus 12:40 is that “Now the sojourning of the children of Israel, [who at that time dwelt in Egypt], was four hundred and thirty years” (brackets mine) (Ex 12:40). This verse does not state that Israel (who did indeed dwell in Egypt, and were there at the conclusion of the 430 years) were there for the entirety of the 430 years. We have already noted that the sojourn in a ‘strange land’ included their time in Canaan as well as the time in Egypt.

The 430 sojourn was to do with Abraham and his seed not having a land of their own. But at the conclusion of the 430 years, in Exodus 6 we read: “And God spake unto Moses, and said unto him, I am the LORD: And I appeared unto Abraham, unto Isaac, and unto Jacob, by the name of God Almighty, but by my name JEHOVAH was I not known to them. And I have also established my covenant with them, to give them the land of Canaan, the land of their pilgrimage, wherein they were strangers” (Exodus 6:2-4)

“And I will bring you in unto the land, concerning the which I did swear to give it to Abraham, to Isaac, and to Jacob; and I will give it you for an heritage: I am the LORD”. (Exodus 6:8)

Interestingly, the Samaritan Pentateuch renders Ex 12:40 as follows: “Now the sojourning of the children of Israel, and of their fathers, which they sojourned in the land of Canaan and in the land of Egypt, was 430 years.”

“And it came to pass at the end of the four hundred and thirty years, even the selfsame day it came to pass, that all the hosts of the LORD went out from the land of Egypt” (Ex 12:41). From this moment the title of the land of Canaan passed to Israel. It was now their land to go and possess by divine decree. Within 3 months the Law was given on Mt Sinai.

So now we come back to Galatians 3:17 and it is here that Paul unlocks the one piece we don’t have recorded in the Old Testament, and what has therefore led to so much conjecture and error – When did the 430 years begin? And where does the 400 years fit in?

We should remember that Paul had been a member of the Sanhedrin, and had been taught by Gamaliel, so knew his subject matter well! Paul states: “And this I say, that the covenant, that was confirmed before of God in Christ, the law, which was four hundred and thirty years after, cannot disannul, that it should make the promise of none effect” (Gal 3:17)

Here we are told that the starting point of the 430 years was the confirmation of the Abrahamic covenant. When was this covenant confirmed? Or to ask the question another way, when did Abraham’s sojourning begin?  Both occur at the time Abraham was 75 and entered into Canaan. From that point it was 430 years to the day that Abraham’s descendants were set free, and the title of Canaan passed to Israel.

So what about the 400 years? The whole sojourn for Abraham and his seed without their own land was 430 years, beginning as noted above when Abraham was 75. At the age of 100, 25 years later, Isaac was born. But it was when Isaac was 5 years old and finally weaned that Abraham held a feast, we read:  “And the child grew, and was weaned: and Abraham made a great feast the same day that Isaac was weaned. And Sarah saw the son of Hagar the Egyptian, which she had born unto Abraham, mocking” (Gen 21:8-9). It is at this moment, 30 years after Abrahams sojourn had begun that his seed began to be afflicted. This affliction would last for the next 400 years culminating in the cruel Egyptian bondage.

Thus there are no contradictions, and thanks to Paul, all argument as to the beginning of the 430 years is settled!

Our verse by verse audio studies of Galatians and PDF Powerpoint slides are available for download.  https://www.calvaryportsmouth.co.uk/sermon-series/sunday-morning-studies/

In the next post we’ll look at another hidden key that unlocks an Old Testament mystery!