Home > A Solid Foundation for Life

A Solid Foundation for Life 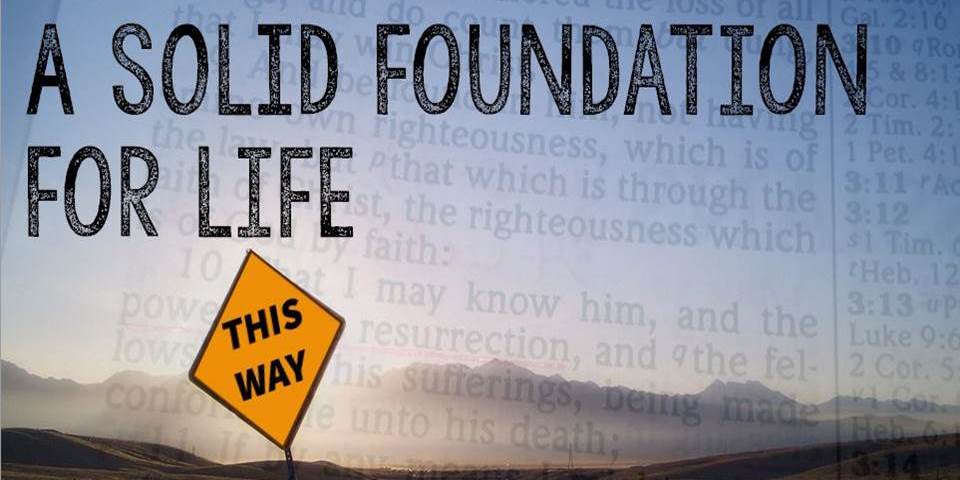 Why do Christian parents bring their children up to know and read the Bible? Is this just indoctrination or are we really giving them a solid foundation for life?

In this study Pastor Barry asks the question ‘how do you know what you know’? What is basis for what you believe? Whether you have realised it or not, we all accept most of what we know on the basis of faith. We might have faith in what our parents tell us, or what we learned at school or university. However, almost all of this is taking what someone else tells us – on the basis of faith, faith that what we are being told is true. Very little of what we know we have actually ‘discovered’ and empirically tested for ourselves.

The Bible exhorts us to think soberly (literally, ‘exercise the mind’) with regard to the things we believe (Rom 12:3). We are not to just take a blind leap in the dark with our lives in the hope it will all work out OK in the end!

What may come as a surprise to some is that the Bible does not expect people to simply believe it. Nowhere are we told to just accept it and don’t ask questions!

The early church certainly didn’t subscribe to wishful thinking! In face the Apostle Peter boldly declares that “we have not followed cunningly devised fables, when we made known unto you the power and coming of our Lord Jesus Christ, but were eyewitnesses of his majesty” (2 Peter 1:16). Peter says ‘we did not make this stuff up!’ ‘We know it’s true because we were there!’.

Dr Luke not only based all that he wrote on eyewitness accounts that had been fully verified (Luke 1:1-2), but also asserted that the belief Jesus was risen from the dead was on the basis of ‘many infallible proofs!’ (Acts 1:3).

When the disciples were looking for a replacement for Judas, they insisted that the one they chose must be an eyewitness of the resurrected Jesus! (Acts 1:21-22).

The Bible really is the most solid, reliable & trustworthy document known to man. This Bible can be demonstrated to trustworthy and true in regard to the scientific statements it makes, many of which modern science has only recently caught up with! In Psalm 8:8-9 we are told that there are pathways in the sea. This led to Matthew Fontaine Maury discovering this to be true, and led to the science of oceanography. The Bible states that living things only reproduce after their kind. this is a fact that has never been violated – despite 150+ years of Darwinian indoctrination from schools to universities to the BBC! (Oh, and please answer me this – why can ITV produce a documentary series looking at the extremes of our planet – Life At The Extreme, featuring Davina Mccall – and not mention millions of years or evolution even once, yet the BBC get barely past the opening credits without some reference to the non-science that is Evolution??). If you want a basis for your beliefs, why choose a man-made theory that has been totally discredited and proven false, rather than accept the simple, straight forward, easy to verify statements given to us in the Bible?

In regard to the unparalleled  historical basis for the Bible, consider the words of Professor Robert D Wilson. We talk about ‘experts’, but consider this:

The critics of the Bible who go to it in order to find fault claims to themselves all knowledge, all virtue, all love of the truth. One of their favourite phrases is ‘all scholars agree’. Well, when a man says that I wish to know who the scholars are and what they agree on? Where do they get their evidence? I defy any man to make an attack on the Old Testament on the ground of evidence that I cannot investigate.

After I learned the necessary languages, I set about the investigation of every singe consonant in the Hebrew Old Testament – there are about one million, two hundred and fifty thousand of them. It took me many years to achieve my task. I had to observe variations in the text, in the manuscripts, notes of the masorites in all their various versions, parallel passages, and contextual emendations of critics; and then I had to classify the results of every character, every consonant, to reduce the Old Testament criticism to an absolutely objective science, something that is based on evidence and not opinion. The result of those 45 years of study which I have given to the text has been this:  I can affirm that there is not a page of the Old Testament concerning which you need have any doubt!”

In this study we look at the overwhelming evidence for the Exodus of the Jews from Egypt, their crossing the Red Sea, their journey to Rephidim where Moses struck a rock and water flowed out. We see that the rock is still there to this day, along with the evidence of a large volume of water once being present, and we see the alter Moses built. We then look at Israel’s journey to Mt Horeb/Sinai (aka Jabel El Lawz in Saudi Arabia), the ‘Golden Calf’ alter, which has been fenced off by the Saudi authorities as an site of archaeological importance, and the super-heated granite rock on top of the mountain that the Bible says God descended on with fire!

You can reject the Bible if you will, but not because there is not enough evidence.

Just as with the Jews in slavery in Egypt, God has offered each one of us the chance to be delivered from the bondage and slavery of sin,  passing by faith through the waters of our own Red Sea, coming face-to-face with God’s righteous Law as was given on Mt Sinai, there to find that there is a Deliverer – Jesus Christ- who will lead us safely to the ‘Promised Land’.

This is why we will continue to teach the Bible to our children, and bring them up in the fear and admonition of the LORD  (Eph 6:4). The reason we believe the Bible and base out lives upon it is quite simply because it’s true! – and the evidence is overwhelming!

But it is not just our children who need to know this. You, the people you work with, your neighbors, your friends, people you bump into down the town… all need to know. Because the Bible tells us that time is running out. If you have not yet put your trust in Jesus Christ, ‘today is the day of salvation’. YOU CAN PRAY RIGHT NOW! and tell Him you believe in Him, that you believe He paid for your sin in full on the cross, and that He will come back and take you home to heaven.

If you already know Jesus as you LORD and Saviour, I pray that this study will stir your heart and encourage you love the Word of God more! – and want to share what He has done for you!

To view the PDF for the audio – CLICK – the corresponding link below: