Over the last 8 months we have been studying through 1st and 2nd kings, we have seen the monarchy in Israel split in two as a result of the fear of man and an unwillingness to trust in God. As a result, each subsequent part of the divided kingdom fell yet further into apostasy to the point that God, as He forewarned (see Deuteronomy 28), brought judgment upon them with first the northern kingdom of Israel being taken by the Assyrians, and now finally the southern kingdom of Judah, being led away captive to Babylon.

Sadly there are many today who think they are getting away with their sin, because God doesn’t immediately bring judgment, yet as Paul reminds us “Be not deceived; God is not mocked: for whatsoever a man soweth, that shall he also reap. For he that soweth to his flesh shall of the flesh reap corruption; but he that soweth to the Spirit shall of the Spirit reap life everlasting” (Galatians 6:7-8).

For almost 400 years the kings of Judah had been sowing to the flesh, worshipping idols and provoking God to anger, now time had run out. At the close of the last session we saw Pharaoh Neco depose Jehoahaz and carry him away to Egypt after just three short months on the throne, and for the first time in their history, a foreign power appointed Judah’s next king, Eliakim, whom Pharaoh renamed Jehoiakim. Now, three years into his reign, in 606 B.C., Nebuchadnezzar came and lay siege to Jerusalem. Jerusalem fell and many of Israel’s finest were taken away to Babylon, including a young boy, around 14 years old, called Daniel.

Nebuchadnezzar allowed Jehoiakim to remain as king on the condition he would serve the king of Babylon, which he did for three years, but then he rebelled.

In 597 B.C. having now been subject to Babylonian oppression for 8 years*(See footnote), 18 year old Jehoiachin (also known as Jeconiah) succeeded his father, but only for 3 months and 10 days, for Nebuchadnezzar returned and once again besieged Jerusalem, this time deporting king Jehoiachin and 10,000 of the brightest, beast and skilled people of the land, including another young prophet by the name of Ezekiel.

Nebuchadnezzar then appointed Zedekiah as king. Not one good thing is spoken of any king after the time of Josiah, not one of these kings had the wisdom to recognise that the calamity that was befalling them was a result of their disobedience to God, and not one of them came repentantly (as Josiah) had done, seeking God’s mercy. 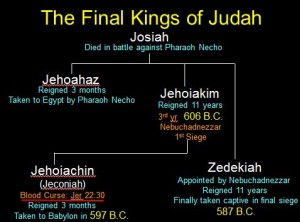 There are some dramatic prophecies given and prophecies fulfilled in this study, not least the prophecy given to Zedekiah (Ezekiel 12:13) that he would be taken to Babylon, but yet not get to see it! This sounds a contradictory statement, until you read 2 Kings 24:7 where we see that Zedekiah was taken captive and brought to Nebuchadnezzar, who then killed his sons before his eyes, and then ‘put out his eyes’. So he went to Babylon, yet never got to see it with his own eyes! – God is not mocked!

There have been many lessons we have learnt in our journey through 1st and 2nd kings, but one of the greatest is summed up in the words given to Israel’s first ever king: “to obey is better than sacrifice, and to hearken than the fat of rams” (1 Samuel 15:22).

Doing things for God may impress other people, it may look as if you are on the right path, but God looks at the heart and is looking for those who will worship Him in Spirit and truth, serving with their whole heart.

May you learn from the failures of these kings, to see that there is nothing the world has the will prosper you in the long run, nothing of any value in a time of need, nothing that matters at all in the final analysis.

What will be written of you in God’s book? Will you be one who ‘did that which was right in the sight of the LORD’? Or will you seek to build your own kingdom, only to find you have lost everything? “For what shall it profit a man, if he shall gain the whole world, and lose his own soul?” (Mark 8:36)

May God richly bless you as you continue to study His word!

* Some think there is a contradiction between 2 Chronicles 36:9 and 2 Kings 24:8 where we are apparently given two different ages for Jehoiachin at the start of his reign. Please refer to the study of 2 Kings 24-25 for the simple resolution to this apparent problem.  https://www.calvaryportsmouth.co.uk/sermons/second-kings-chapter-24-25/