Last time we looked at how amazing our Great and Mighty God is. We discovered. How our Great ‘I Am’, Yahweh or Jehovah has myriad names throughout the Bible. We saw how the Creator of Heaven and Earth is God in three persons, working together to form the Universe and all there is in it, so much of which is beyond our capability to understand or to get our heads around.

We looked at some of the titles attributed in  scripture to Elohim and the Bible references that mention them. I don’t know about you, but I had never known before some of these names or their meanings, and I only covered a few of many of those names.

This time we are going to look at the name El Elyon.

El Elyon means God Most High! This name occurs early on in the account of Abram, when God reveals Himself to Abram in a most remarkable way, a way which brought Abram into a closer relationship with his Lord. This title El Elyon, appears four times in Genesis and occurs frequently throughout the Old Testament…..Psalm 18, Numbers 24, Deuteronomy 32, 2 Samuel 22, and others. It is a name that also points forward to the Millennial reign of Christ as we shall see.

I will focus on one account which is a great illustration of this title and of the character of God.

This is the first war ever recorded in history. This confederation of kings declared war on the cities of Sodom and Gomorrah and the two armies fought each other in the Valley of Siddim. The attackers won and the kings of Sodom and Gomorrah fled to the mountains. The victors looted the two cities and took everything including the people and amongst them Lot, Abram’s nephew, who had foolishly chosen to live in a city called ‘Burning’, that is Sodom, ruled over by a king called ‘Son of Evil’ that is Bera.

–  As an aside here, we recall that Lot through his daughters became the founder of two tribes of people, the Moabites, who became known for their sexual indulgence and who worshipped Baal and Ashteroth, and the Ammonites who worshipped Molech, and were known for their human sacrifices, not least of their own children. These two people became enemies of Israel and of God. Our choices make a difference. Lot was tempted by riches and from there on it was a downhill slide. He lacked wisdom and he lacked faith in El Elyon. –

So back to our account. Off went the victors with loads of loot. But someone who escaped the battle came to tell Abram what had taken place, and Abram, ever loyal, was determined to get Lot and his family back. I think most of us would have left Lot to stew in his own juice, but not Abram. Off he went with his household militia, 318 me trained to fight. In those days I guess that if you were wealthy and part of a large family group or tribe, then you needed protection and Abram had certainly made sure that he had that. They had to travel a long way, around 100 miles north to Dan, and those who chased the fugitives to Damascus had to go another 200 miles. But Abram’s army routed the enemy kings and rescued all the booty, the captives and Lot and were returning home when something very interesting happened. Remember here is Abram returning south with all the goods and people of Sodom and Gomorrah. We know the future awaiting those same people…..utter destruction by God because of their immoral ways. Why did God allow Abram to take them back? Why didn’t he just let them go north to whatever destiny awaited them there? Was it all for the sake of Lot? Or was God foiling Satan’s purposes and plans? Did Satan know God’s plans to destroy Sodom and Gomorrah? Did he try to get in the way of those plans?

Who knows…..we can only guess! Only God has the answers to these questions, but it does make you think. What we do know is that God had to put an end to the dreadful and obscene perversions being practiced in those cities.

Now we come to the most interesting part of the story. Abram is met by two kings: The King of Salem and the King of Sodom; the King of peace and the king of evil. What a contrast! The King of Salem (from which comes shalom), Salem becoming much later the city of Jerusalem, was named Melchizidek (v18). He brought out bread and wine. He was the priest of the Most High God, El Elyon. Carrying the symbols of the Last Supper and now our Communion, this priest and King was a foreshadowing of Jesus Christ Himself.

In the history of the people of God, from Abram onwards, there is never a priest who is king or a king who is priest. Some tried, like Saul, and paid the price for their temerity. Only Melchizidek and Jesus are known for their dual role of Priest and King. Jesus is the fulfilment of Melchizidek and more, for Jesus is the Great High Priest and He is also the King of Kings.

Melchizidek, in his role of priest served Abram with the bread and wine, pointing forward to The Passover meal, in turn pointing forward to the death and resurrection of Jesus Christ our High Priest and ultimately to the fulfilment of the words of Jesus when He said, “But I say to you, I will not during of this fruit of the vine from now on until that day when I drink it new with you in My Father’s Kingdom.” (Matt 26:29).

Then in his role as King, Melchizidek accepts a tithe from Abram.  Melchizidek as a type of Christ accepted tribute from Abram, a type of the people of God who issued from him. (Hebrews 7:1-3 and Hebrews 7:17) Melchizidek vanishes from the continuing account as if he had never been. He is mentioned in Psalm 110 v 4, 1000 years later by David as he speaks prophetically of Jesus and of course in the letter to the Hebrews, 1000 years further on again. This ancient king’s continual priesthood does indeed represent Jesus’ priesthood which is everlasting and He will reign and rule as High Priest and King of kings throughout the Millennial reign and on for eternity.

Then the King of Sodom, who had fled from the conspiracy of attacking kings, approached Abram and offered him all the recovered booty from the battle that Abram had fought up north in Dan. A bit of a nerve, don’t you think?

He had had to see Abram succeed where he himself had failed and being evil in heart he wanted to tempt Abram. It seems that this black hearted king was jealous of Abram’s hard won success and so offered all the spoils to him, as long as all the people were returned to Sodom. These riches Abram was offered must have been huge, gold, silver, precious jewels, livestock, clothing, furnishings, etc. But Abram could see what lay behind this seemingly generous offer.

“But Abram said to the king of Sodom, ‘I have raised my hand to the Lord, God Most High (El Elyon) the Possessor of Heaven and Earth, that I will take nothing, from a thread to a sandal strap, and that I will not take anything that is yours, lest you should say, ‘I have made Abram rich’.” (Genesis 14:22-23)

All Abram wanted was Lot and his family safe and sound. Temptation always comes from the enemy and this is no less than that. Satan’s plans had been foiled and this was a last ditch attempt to catch Abram out and cause him to fall.

It is like that for us too. When we become believers the powers of Hell are defeated in our lives and Satan can no longer have his spoils in us. But along the way we meet two kings, one to tempt us away, the other to draw us closer to Him and show us His glory.

Abram did not get caught in the trap prepared for him, he resisted temptation, indeed he didn’t even have to think twice about it. He was faithful to God in every way and the foul king of Sodom was unable to boast that he had given Abram all the prizes in his abundant generosity, because there is no doubt that if Abram had accepted then that man would have held it over Abram and demanded some sort of recompense for the so called gift. Abram knew that El Elyon owned everything anyway and God had blessed him so much already with all, and more than he needed, but Abram didn’t want to be beholden to his enemy in any way so that evil King could brag about what he had done and how he had made Abram rich. Abram had been given a new revelation of God’s power through Melchizidek. (Genesis 14:19-20) El Elyon, God Most High, possessor of Heaven and Earth. What could tempt Abram? What can tempt us when we know that El Elyon is in control of everything?

He had known the God who called him out of Ur, but not then as El Elyon. Now he did, so why should he want anything else? El Elyon would meet all his needs. Have we discovered God as El Elyon? Have we begun to see Him with new eyes? Are we convinced that He holds our entire lives in His hands? There is no area of our lives that He is not interested in. All is in His more than capable hands.

Perhaps we need to take stock of our lives, review what we believe and maybe alter our perspectives and our ways of seeing our God Most High, El Elyon. 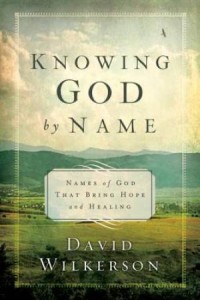 When preparing a study like these, one has to look for helpful resources, for guidance and instruction and I have found David Wilkerson’s book ‘Knowing God by Name’ to be a              most useful tool in this respect and would recommend it for further insight.