This morning we began a verse-by-verse study through the Book of Revelation – which is particularly timely given the rapid changes in the world. 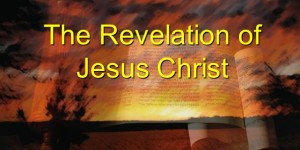 Back in October 2015 The Independant reported “Sweden ‘fast becoming world’s first cashless society’”[1]. In May last year the we read that the “UK moves towards cashless society” [2], and at the same time we read “Denmark is set to become the first country in the world to make cash payments obsolete”[3]. The World bank & IMF are moving us closer to a single financial system for buying and selling, and there is no secret that plans for a one world government are no longer just the on the lips of Bible prophecy students – these things are happening before our eyes. So too is the rise in lawlessness, and wars and rumors of wars are everyday headlines.

In addition, we now have a Pope who is effectively calling for a one world church  – see the shocking ‘Pope’s Prayer request’ video released in the past week stating that Christians, Jews, Muslims, Buddhists – and quite frankly anyone else – are all worshiping the same God![4]  ) – and this is coming from a Pope who stated in a Mass before Christmas that atheists who do good are ‘redeemed’!

Now, on the surface this seems like the ultimate in acceptance and tolerance – all people of all faiths, religions and creeds working together for a common cause. This is seen as a good thing. But just stop and think about this for a moment: What kind of God would allow people to approach Him in any way they choose? What God would allow people to call Him by any name that suited them? What kind of God would establish a multitude of religions with contradictory beliefs and practices, see countless numbers of believers give their lives to maintain their religious freedoms and right to be different, and then reveal that actually they a 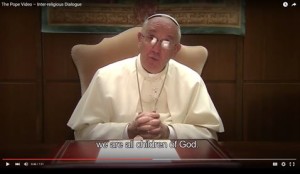 re all leading to the same place anyway!(?) Surely this would reveal a ruthless tyrant of a god on a par with the Roman Emperors who watched subjects in their empire fight to the death in the Coliseum?

Although those that promote the ‘all roads lead to God’ philosophy hail themselves as tolerant and accepting, they are in actual fact nothing of the sort. Consider what they are saying: ‘Regardless of what you believe, regardless of your heritage, we all have to go to the same place’; they are telling us that there is only one destination for all (whether you want to go or not!). That is more narrow-minded and dogmatic than anything Jesus ever said. Jesus said there are two destinations and we each get to choose: ‘smoking’ or ‘non-smoking’!

The world is spiraling out of control and just as Isaiah said would one day come, we are continually seeing that which is evil called good, and good evil (Isaiah 5:18-20), and as if that were not enough, these things are paraded through our streets and we are told we must accept or we are being intolerant! Er… excuse me, who is being intolerant? Who is showing hatred to who? [True] Christians, following Christ’s example, love all people, and desire that all people would come to know His forgiveness for their sin, and then experience the peace and lasting joy that comes from a relationship with God Himself.

But it seems to me that people are becoming more and more intolerant toward the Gospel of Jesus Christ, and to say that Jesus is the way, the truth and the life, and that no one comes to the Father but by Him is now almost taboo!  (John 14:6)

Paul said to Timothy, “This know also, that in the last days perilous times shall come. For men shall be lovers of their own selves, [ever heard of ‘selfies’?] covetous, boasters, proud, blasphemers, [have you seen TV recently or a movie? Home many times do that use Christ’s name, or God’s name – yet never Allah or Buddha etc.]  disobedient to parents, [this is now just the accepted norm] unthankful, unholy, Without natural affection, [if I were to comment on what this means I would probably be arrested for being intolerant of people who are themselves intolerant of my belief, which is actually the same belief held by Christians for 2000 years]  trucebreakers, false accusers, incontinent, fierce, despisers of those that are good, Traitors, heady, highminded, lovers of pleasures more than lovers of God” (2 Tim 3:1-4). We really are in the last days!

If you live in the Portsmouth area, please come and join us as we study through the Book of Revelation. If you don’t live close enough, we’d love for you to join us via the web and pray that you are blessed by our studies through this book – usually uploaded each Sunday evening. We also make available the Powerpoint slides used in the teaching (which saves writing notes as you listen!). As always, we urge you to be Bereans, who we read about in Acts 17:11, who received the Word with all readiness, but then searched the scriptures daily to see whether those things were so!

We would also ask for your prayers for this ministry, as we seek to remain always obedient to our LORD and Saviour.