This teaching, on the Feast of Chanukah, was given by Adrain Hudson at our family service on 10th December 2017.

The events that led to this Jewish celebration were recorded in advance in the book of Daniel,  hundreds of years before 167 B.C. when the Seleucid king, Antiochus Epiphanies desecrated the Jewish Temple, leading to the Maccabean revolt, and the miracles commemorated by this feast.

It is worth pointing out that there are a staggering 135 fulfilled prophecies from Daniel 11:2-35. Bible critics hate Daniel chapter 11 because it offers irrefutable proof that the Bible is the Word of God; for no man could accurately predict, with such detailed precision, the rise and fall of world empires, the political manipulating and deception of successive kingdoms, and the battles that would be fought. We need to remind ourselves, that all of this was recorded hundreds of years before the prophesied events actually took place.

The Apostle Peter talks about the ‘more sure word of prophecy’ that we can depend upon, far more so than any emotion or feeling. Throughout scripture, prophecy confirms the Word and shows it to be true. Sceptics will continue to doubt these things, yet with each archaeological discovery, they are forced to withdraw their theories and accusations as the evidence continues to mount in support of the Word of God. “Remember the former things of old: for I am God, and there is none else; I am God, and there is none like me, Declaring the end from the beginning, and from ancient times the things that are not yet done, saying, My counsel shall stand, and I will do all my pleasure:” (Isaiah 46:9-10).

In this study, Adrain explains that Antiochus Epiphanies (whose name means ‘the shining one’) was a p 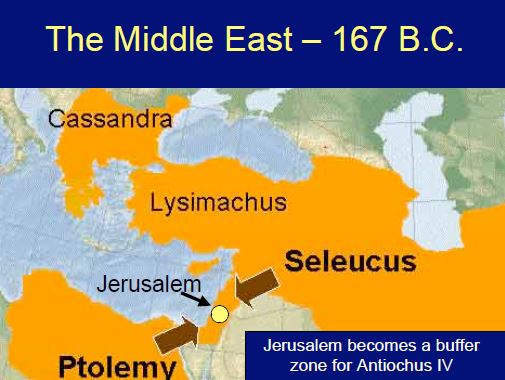 art of the Seleucid Empire that had come to power following the death of Alexander the Great. According to the book of 1 Maccabees, and other historical records, Antiochus IV was the 8th king of the Syrian dynasty, reigning from 175 – 164 B.C. He ascended to the throne after the death of his father and imprisonment (by Rome) of his elder brother, Seleucus Philopator. Yet Antiochus was not the rightful heir, for Seleucus had a son. However, by flattery and bribery Antiochus succeeded in becoming king. He invaded Egypt and defeated Ptolemy VI, but on his way back he stopped off at Jerusalem.

Jerusalem was situated right in between the Seleucid and Ptolemaic empires, and acted as a ‘buffer zone’ in between the two rival kingdoms. As you can imagine, the Jews were not very enamoured by this and tried to resist. In response, Antiochus plundered and desecrated the temple and even went as far as sacrificing a pig on the alter. He tried to do everything he possibly could to offend the Jews as can be seen from the following record from 1 Maccabees:
“And the king sent letters by messengers to Jerusalem and the cities of Judah: he directed them:
– to follow customs strange to the land,
– to forbid burnt offerings and sacrifices and drink offerings in the sanctuary,
– to profane Sabbaths and feasts,
– to defile the sanctuary and the priests,
– to build alters in sacred precincts and shrines for idols,
– to sacrifice swine and unclean animals, and
– to leave their sons uncircumcised,
They were to make themselves abominable by everything unclean and profane, so that they [the Jews] should forget the law and change the ordinances. And whoever does not obey the command of the king shall die”

Antiochus (in a dress rehearsal of what the coming Antichrist will do) put an idol in the temple and stopped the daily sacrifices.

A Jewish priest, by the name of Mattathias, was so incensed by the desecration of the temple and the erecting of an idol in the holy place that, not only did he refuse to worship this idol, but also started killing the Hellenistic Jews* who did. (*Jews that had adopted the
Greek culture and lifestyle). As a result of this, he and his five sons were forced to flee into the wilderness. After Mattathias’ death about one year later, his son Judas Maccabeus (whose name meant ‘hammer’) formed an army and led a revolt against Antiochus IV, which in 164 B.C. was eventually successful in overthrowing the Seleucid control of Israel. When the Jews finally entered the temple they found only one days supply of the consecrated olive oil that was needed to maintain the light on the great seven-branched lampstand called the ‘Menorah’. According to the Law of Moses, this was to be kept continually burning. The Jewish Talmud records that the priests poured the oil into the seven lamps and lit them to bring forth light. Miraculously, the one day supply of oil burned for eight days – which was the length of time it took to press, prepare and consecrate new oil!

To commemorate this event the Jews added the Feast of Chanukah, also called ‘Festival of Lights’ or ‘Festival of Rededication’ to their annual feasts. The scriptural endorsement of this feast is confirmed in John 10:22: “And it was at Jerusalem the feast of the dedication, and it was winter. And Jesus walked in the temple in Solomon’s porch.” (John 10:22-23).

You can listen to the audio on this web page, or save it for listening to later.  We have also made available the Powerpoint slides (in PDF format) that outline the key points of this study.

We hope and pray this teaching will bless you and encourage you to undertake your own personal study and adventure in God’s Word!