This teaching was recorded on 29th September 2019 at Calvary Chapel Portsmouth’s children’s service.

In this 3rd teaching on the fallacy of the theory of evolution as proposed by Charles Darwin, pastor Barry explains to the children that what they will be taught in school on this subject is somewhat lacking in scientific support!

Even the much-publicised finches on the Galapagos Islands, so often heralded as ‘proof of evolution’, are merely an example of adaptation within a kind – they started off as birds, what did they become? Birds! They did not change into anything else! They already had the genetic information to make a beak, that information allowed for variation, but it did not allow them to become something other than the bird-kind they already were!

It is also important to recognise that so often, in a classroom setting, children, are asked ‘bad questions’, i.e. questions that lead them to make unjustified assumptions, assuming evolution to be an already proven fact, rather than teaching them to think critically and ask, is evolution scientifically possible in the first place!  – to which the answer is a resounding no!

Then there is the subtle way the evolutions proponents employ a ‘bait and switch’ tactic, pointing to something that is science (such as variation within a kind) but then making to colossal leap to suggest that proves everything else.

Another thing that is seldom taught is the various sub-headings we have to consider if we are to honestly talk about evolution.

Macro Evolution is most commonly taught (the origin of the major kinds), but no time is given to the discussion of Cosmic or Chemical evolution, without which the show can’t get started in the first place! 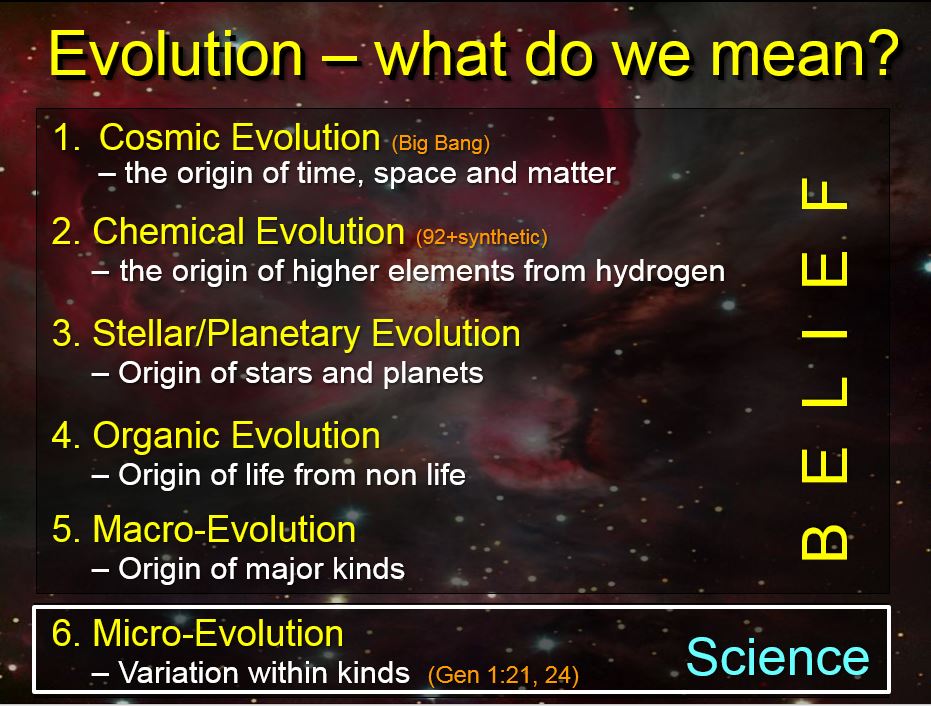 Finally, in this teaching, we considered the still-taught ‘Nebular Hypothesis’. In a nutshll this is the idea that the planets in our solar system all originally came from filaments ejected from our Sun, that then cooled and became the planets we know today.

Although popularised by Immanuel Kant in his 1755 book “General History of Nature and Theory of the Heavens”, Kant got much of his ideas from a work published in Latin by Emanuel Swedenborg. Swedenborg claimed he, in turn, had got his information from seances with men on Jupiter, Saturn and places more distant!

Yes, it really is as bad as that! Our education system will champion a theory proposed by a man who claimed to have psychic powers and was given his information by aliens!

The Bible says we must cast down every argument that stops people looking to God. Evolution is exactly that, and since Michael Gove’s decision, when he was Education Security in 2014, to teach evolution to primary school children, we must challenge the non-science that is being taught to our children as a true account of our origins.

May you be blessed and encouraged by this teaching.