This concluding part of our mini-series on the Hidden Treasures of Christmas was recoded on the 12th December 2021.

We have seen the reason Bethlehem was chosen (500 yrs beforehand) was because it was the town of sacrificial lambs – born in Bethlehem, offered in Jerusalem.

The reason the shepherds were chosen was because their job was to inspect the lambs destined for sacrifice – the lambs had to be ‘without spot or blemish’.

But how could God ensure Jesus was born in Bethlehem?
By engineering the circumstances, by means of the Roman census, to have Mary and Joseph travel to their family town.

But God had not only stated the town in which the Messiah was to be born, He had also stated, also through the prophet Micah, the exact location… “And thou, O tower of the flock, the strong hold of the daughter of Zion, unto thee shall it come, even the first dominion; the kingdom shall come to the daughter of Jerusalem.” (Micah 4:8). The ‘tower of the flock’ was none other than ‘Migdal Edar’, a lambing / lookout tower right on the outskirts of Bethlehem. It is where Bethlehem’s shepherds would bring their sheep to give birth to the lambs intended for sacrifice in Jerusalem. These shepherds would wrap their newborn lamb’s in ‘swaddling bands’, made from the old robes of the priests , to prevent them from being injured in any way. They would them be laid in ‘the manger’ a hewn out rock inside the base of the tower.

But how could God ensure Mary and Joseph would end up at this place, and not simply seek shelter with their family who lived in Bethlehem?

As we saw last week, the idea of an innkeeper, presiding over an inn, who was benevolent enough to offer his stable, is purely fiction birthed from tradition, with no basis in scripture!  – and what possible reason would Mary and Joseph have for not wanting to stay with family – the family with whom they were being numbered as a result of the census?

How was God going to ‘get around’ this problem and get Mary and Joseph to Migdal Edar?

Quite simply, by making them ‘not welcome’, even with their own family, so that ‘no place was found for them’!

As we noted in the last session, the birth of Christ almost certainly occurred on the 1st Tishri 2 B.C. – in that year, this was the Feast of Trumpets, one of the seven main feasts in Israel’s calendar. Even in the height of Israel’s apostacy they still celebrated their feasts! (Hosea 2:11 / Amos 2:8). However, if you were defiled, you were not permitted to celebrate (see the example in Numbers 9:6-13).

Now, as detailed in Leviticus 12, any woman giving birth would be defiled, as would be any house she was in or anything she touched (Leviticus 15:19-33). Coupled with the fact that Mary was pregnant, but not yet married,  would be enough for even her relatives to say ‘there is no place here for you’! Having literally just passed this warm, dry, secure lambing tower on their way into town, it should come as no surprise that Joseph knew exactly where to take his heavily pregnant fiancée.

After childbirth it would be 40 days (for a male child) before the woman would be ‘clean’ again, and only then after she had made an offering in Jerusalem as prescribed by the Law. Luke tells us that is exactly what they did. Jesus was circumcised on the 8th day, and then after the 40th day Mary, Joseph and Jesus went to the Temple in Jerusalem, where they met Simeon and Anna, and offered the sacrifice as required by the Law.

What happened next seems to be the best kept secret in all Christendom! As staggering as it may seem, THEY WENT HOME!

Not to Bethlehem, because they didn’t live there, but to Nazareth, where Jesus “grew, and waxed strong in spirit, filled with wisdom: and the grace of God was upon him”. (Luke 2:40).

Now, you may be wondering what happened to the 3 kings who followed the star to the stable in Bethlehem…  Well, once again tradition has led us all blindly in the wrong direction (literally!).

They were not kings; there were not three of them; they did not ride on camels, they did not follow the star to Bethlehem, so therefore could not have visited the stable – which, as we have already noted, did not exist either!

You see, because Mary and Joseph went to the Temple 40 days after Jesus was born, then returned home to Nazareth, there was no time for the Magi – to give them their proper appellation – to visit them in Bethlehem! In fact, from Matthew’s account, we find that the Magi didn’t visit Jesus until around 2 years after His birth, and they needed the star they had previously seen in the east to guide them to the HOUSE where the, by now, YOUNG CHILD was.

The Magi were originally a highly respected Median priestly order. They were known for their apparent ability to interpret dreams and foresee the future. Hence, most ancient middle-eastern kings would have their team of Magi as advisors. We find from the book of Daniel that Daniel himself was actually put in charge of this elite priestly group, and evidently Daniel revealed to them the prophecies regarding the coming Jewish Messiah. Given that their lives had been spared through Daniel’s interpretation of Nebuchadnezzar’s dream (Daniel 2:24) it comes as no surprise they were willing to listen to Daniel, and even follow his God. 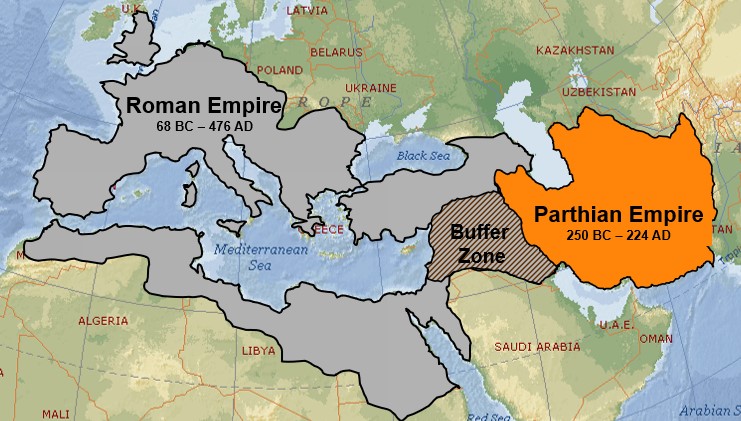 To complicate matters, Herod the Great, an Edomite who had been granted the rule over Israel by Rome, was sandwiched between these two great rivals.

Now, imagine the tension as a large number of Magi, with their entre entourage (estimated at anything up to 1000), arrive at Jerusalem, ride up to the palace of Herod on their fine Persian horses and demand “Where is he that is born King of the Jews? for we have seen his star in the east, and are come to worship him” (Matthew 2:2). We  may miss the significance of their statement, but in effect they were saying to Herod, ‘where is the rightful king of Israel?’! Herod immediately knew he had a rival! The year would have been 1 A.D. – this is the first time Imperial Rome would have been alerted to the existence of this Jewish King – Jesus Christ. Is it just a coincidence that the system of dating starts from this time, the time that Rome first encounter Jesus?

In a mad panic, Herod consults his aids and finds that it had been prophesied in the Jewish writings (the book of Micah) that, one day, a deliverer would be born, of the royal line of David, and this ‘ruler in Israel’ would establish His throne and kingdom, putting down all Israel’s enemies! Upon finding out that Bethlehem was prophesied as the birth-town of the Messiah, he askes the Magi to go and find Jesus, and then let him know where he was! Herod also found out when they first saw the star – because he needed to know how old, by now, this pretender to his throne would be!

But, miraculously, when the Magi leave Herod, WOAH! (or as Matthew put’s it ‘Lo!’) – they see the star again that they HAD SEEN before leaving home, some 1000+ miles away in Babylon!

However, the star did not lead them to Bethlehem – there would have been no point! Mary and Joseph, and the King they were seeking were up north in Nazareth! That is why the star was needed again, to lead them to where the YOUNG CHILD was now residing!

Being warned by God of Herod’s intentions, the Magi return home ‘another away’ – thus keeping Herod in the dark, much to his fury!

What is the real significance of all of this?

Jesus is spoken of as both the suffering servant and the king of kings. To some this is a dichotomy; it has led some to postulate that there must be two Messiah’s foretold in scripture.

But there are not two Messiah’s, but two comings!

Firstly, as the suffering servant, the spotless Lamb of God to take away the sins of the World – announced to Bethlehem’s shepherds to confirm He was without spot and blemish, able to be offered as a sacrifice for sins in Jerusalem.

Later He comes as the rightful King of the Jews, ratified as such by the Magi, these Mede-Persian king-makers. His Second Coming will be to establish the Throne of David and rule the whole world from Jerusalem!

This is the real wonder of Christmas, and it is a reason to celebrate!

May you have a blessed Christmastime, growing in knowledge and grace!