This teaching on Micah ch3-5 was given by pastor Barry Forder on 7th February 2022.

Micah chapters 3 to 5 form the second section in this short book. In chapter 3 Micah expresses God’s displeasure at Israel’s leaders:

In chapter 4-5 we have some of the most incredible prophetic verses in the Bible! 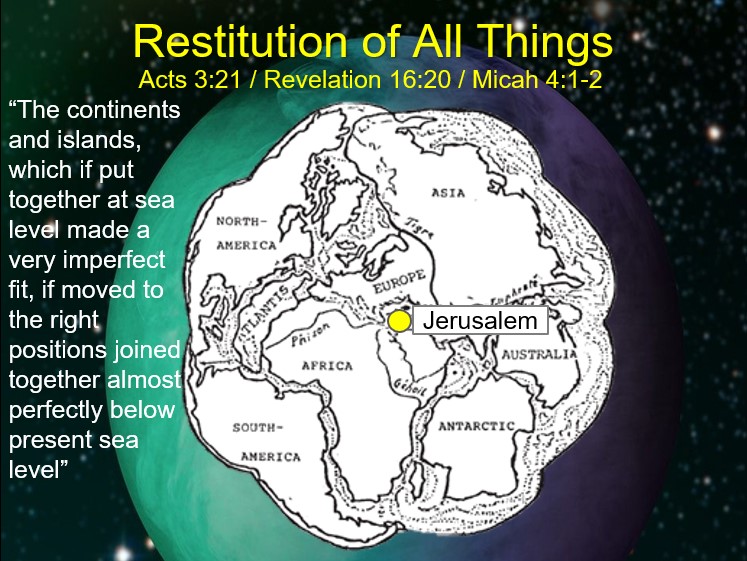 Micah prophesies that 1) a temple will one day be built in Jerusalem 2) from which the Messiah will rule and reign the whole world, and 3) that there will be cataclysmic changes in the world’s geography such that the world’s mountains will be brought down but Jerusalem will literally be elevated to the highest point on earth (Psalm 48:2). The earth will return to being one land mass with Jerusalem at the centre, and 4) all the people’s of the world will go up to Jerusalem to 5) learn from the Messiah as He teaches.

6) The nations of this world will be judged (see the ‘sheep and goats’ judgment in Matthew 25), 7) war will end and the Prince of Peace will rule. 8) The Jews will finally live in peace and prosperity in their own land. 8) The whole world will know of the God of Israel and 9) Israel will once again worship YHVH their LORD and God. 10) Israel, who had been made to limp as a result of God’s wrath (see the remarkable prophetic parallel in Genesis 32:24) 11) will be gathered back to their land where 12) the Messiah will rule over them from Mt Zion.

As if all that was not astonishing enough, Micah then goes on to allude to something that has been a point of confusion for the Jews to this day. 13) Micah speaks of ‘the first dominion’, that is to imply a second would follow. For the Jews passages like Isaiah 53 are a conundrum. How could the Messiah come as  ‘suffering servant’, ‘a man of sorrows’ to be ‘rejected of men’, for Him to go ‘as a sheep before her shearers is dumb’, to be ‘cut off out of the land of the living’? Yet, countless passages also speak of the Messiah being victorious over His enemies. Are there to be two Messiah’s?

No! Not two Messiah’s, but two comings’. The first dominion, then the second dominion!

Micah tells us that the ‘first dominion’ would not be with pomp and ceremony, but to a shepherds tower on the outskirts of Bethlehem. Migdal Edar was a tower that existed from the time of Jacob (Gen 35:21), but had become the place where the Levitical shepherds raised sheep for one purpose only – to be offered as atonement for sin 8 miles away in Jerusalem. These sheep had to be without spot and blemish, so they were wrapped in ‘swaddling bands’ – strips of cloth made from old priestly garments – so as to prevent the baby lambs thrashing about and injuring themselves. These new-born lambs would then be laid in a hewn depression of a limestone rock known as “the manger” inside the base of the tower.

Prominent Jewish writers concluded in the Midrash (an early Jewish commentary on the O.T.) that of all the places in Israel, it would be at  Migdal Eder, (meaning  “The tower of the flock”) in Bethlehem, where the arrival of the Messiah would be declared first.

It was to these Levitical shepherds in the fields around Bethlehem that angels appeared to announce the birth of the Messiah – the coming of the first dominion. The shepherds did not need to give specific instructions in order that the shepherds could find this new-born baby, they simply gave a sign that the shepherds would have immediately understood. The babe would be 1) wrapped in swaddling bands and 2) laying in THE manger! This could only mean that something extraordinary had taken place at their tower – just as Micah had prophesied 600 years before!

No doubt these shepherds would have been aware of this prophecy, and the Jewish belief that it would be to their tower the Messiah would come. Their fear soon gave way to rejoicing as they find a spotless Lamb – Jesus – lying in their tower! Yet lambs born here were destined to be offered as sacrifices in Jerusalem – no wonder Mary pondered these things in her heart!

14) So that we are in no doubt of these things, Micah expressly states that the Messiah will be born in Bethlehem.

Micah then reminds Israel, that before this happens, the nation would be taken captive to Babylon, but that God would preserve them and bring them back to their land for this Child to be born. Micah then skips 2000 years of history – omitting the church age throughout which time Israel’s eyes have been blinded (see Luke 19:42 / Romans 11:25) – and jumps to 15) the regathering of Israel back to their Land and 16) the ‘second dominion’ giving us details of the Second Coming of Jesus; including 17) the Messiah’s victory over ‘The Assyrian’ aka Antichrist. 18) Israel will become a blessing to the whole earth and 19) will finally be the ‘head and not the tail’, subduing their enemies. 20) Idolatry will be no more, and 21)  God will put an end to man’s boast in the work of his own hands.

May you be blessed and encouraged by this study.