This study of Zechariah Ch4-5 was given by pastor Barry Forder on 29th May 2022.

Zechariah had a series of visions, all apparently in one night. These visions not only gave comfort to Zechariah and the remnant that had returned from captivity in Babylon at that time, but also prophetically outline significant events that will take place as God restores His people Israel and readies the earth for the Millennial reign of Christ.

In the 4th vision Zechariah sees a menorah – the 7-branched lampstand that God gave Moses the instructions to build for the Tabernacle in Exodus 37.

In Revelation chapter 1, Jesus tells us that this lampstand, that was made from one solid piece of pure gold and hammered into shape, is an idiom of the Church. The Church also is one body in Christ, hammered into shape by our Master craftsman’s tender love and moulding. We are purified through the testing of our faith (see James 1: 2-3). As with the menorah we are to be filled with the oil of His Holy Spirit and bear His light to all around us.

Either side of this (that is, either side of the Church), Zechariah sees two olive trees, representative of the Nation of Israel. It is no coincidence that following the return from Babylon, God dealt with Israel up until the time they rejected their Messiah (see Luke 19:41-44). Whilst the early Church was indeed entirely Jewish, it soon became clear that the Gospel was to now go to the gentiles (see Acts ch10). Though many Jews believed, as a Nation, Israel’s eyes will remain blinded ‘until the fulness of the gentiles has come in’ (See Romans 11: 25-26).

God gives Zechariah comfort, declaring that the Temple will be rebuilt, that all the problems then facing the Nation of Israel, that seemed like a mountain to overcome, would be levelled. God’s promises to Israel would be fulfilled, not by might, nor by power, but by His Spirit. It would be God’s Spirit that would be breathed upon and indwell the Church. The Church would be a work of Divine grace for Jew and gentile alike.

From what we read in scripture, following the Church-age, God’s attention will be once again wholly turned to Israel. Zechariah’s attention in then focused upon the two olive branches (seemingly as distinct yet part of one of the olive trees).  Zechariah is told that these are two anointed individuals that will (one day) stand before God, to serve Him.

We see these two individuals appear again in Revelation ch 11, as two witnesses whom God will raise up to preach to the world after the Church has been removed at the time of the Rapture.

They will perform miraculous signs and wonders as a witness and demonstration of God’s omnipotence and sovereignty during the first three-and-a-half-years of the coming time of Tribulation.

Zechariah Chapter 5 also seems to foretell an event that will occur during this time.

All false religion began in Babylon at the time of Nimrod and the Tower of Babel, shortly after the time of the Flood (see Genesis 10). Throughout the ages, false religion has taken many forms and faces, but Revelation 17 & 18 reveal that a One World religion is on our horizon, that will come under the umbrella of the Roman Catholic Church. This religious system has and will exert incredible pressure and influence over the kings of the earth, and Zechariah sees that it will eventually return to the plain of Shinar (modern Day Iraq) where Babel was located. There God will use the kings of the earth to pour out His wrath and judgment on this ‘abomination’ that has kept so many from the truth. Isaiah 13/14, Jeremiah 50/51 and Revelation 17/18 all foretell this coming judgment that was birthed and will be consumed in Babylon. 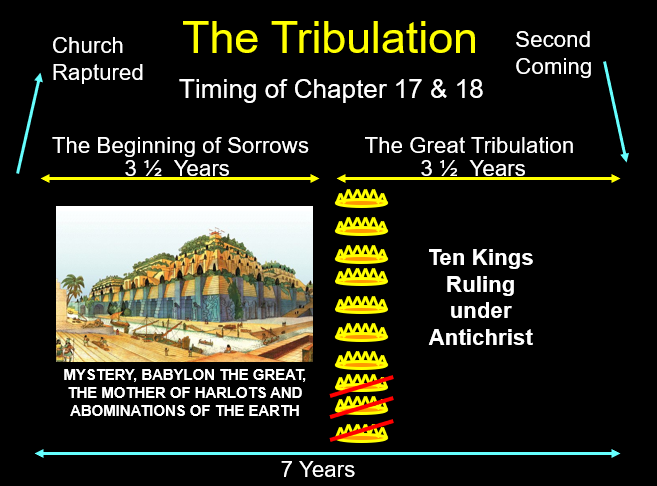 May you be blessed and encouraged to study God’s Word more as we see these day’s approaching!